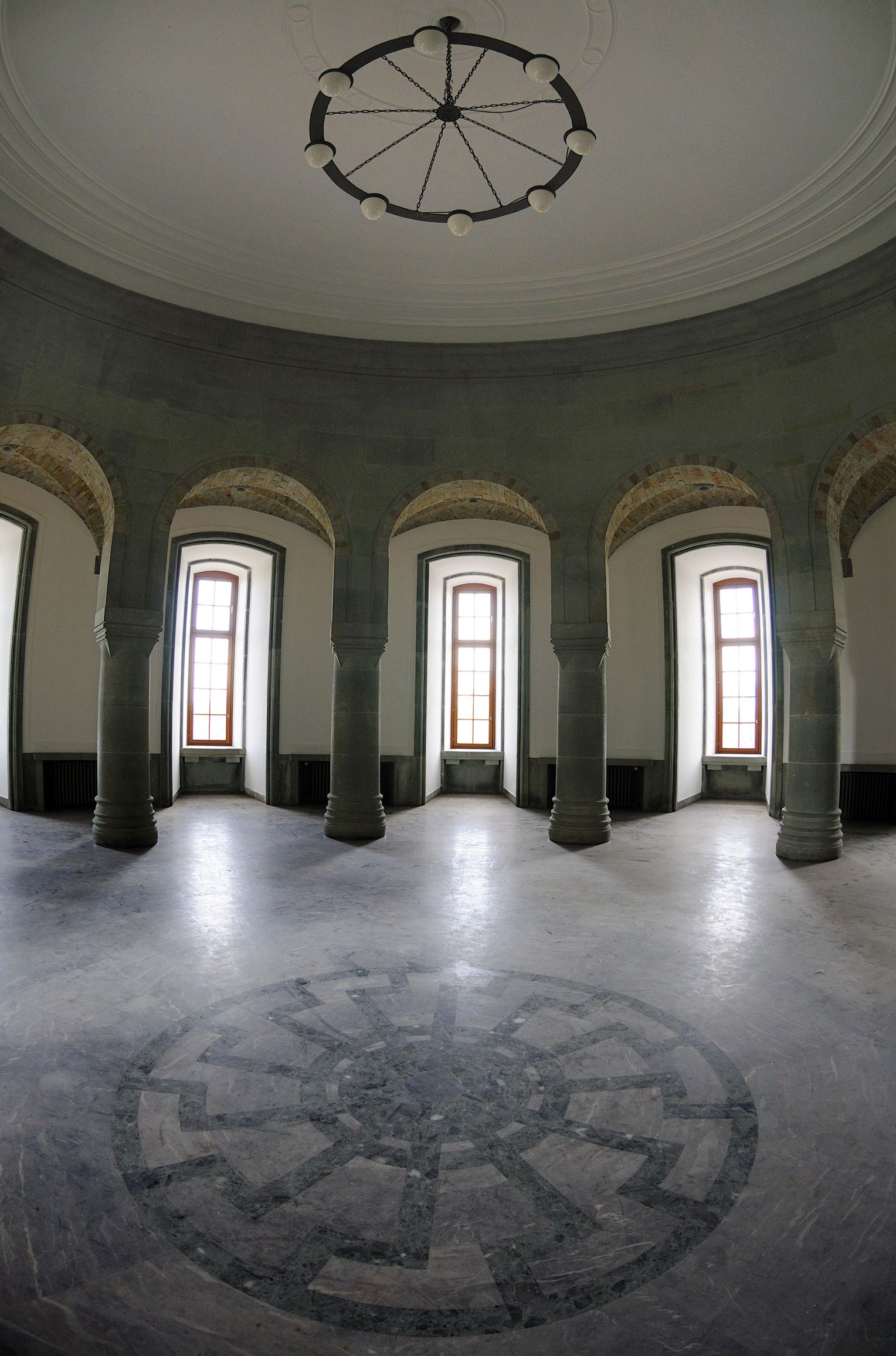 All myths regarding the NSDAP period in Germany have been around long enough take on an aura of facthood whether they deserve it or not, this ranges from such things as Hitler being a spastic carpet biter with one testicle to more widely talked about myths where everyone pretends that hydrocyanic-acid gas can be pumped through common metal plumbing fixtures without reacting or spontaneously combusting when contacting alkaline materials like untreated concrete…. Another is misinformation over the existence of a symbol called the “black sun”.

This symbol is loved by a wide swathe of folks, from larping 1488 nerds who aren’t brave enough to use swastikas to “black sun/ esoteric Hitlerist” cultists, to fake occultists and pseudo-experts on esotericism who have no sympathy or connection with neonazism and no fetishism for the real thing as it existed during the NSDAP era.

I’m writing this piece in an attempt to counter the nonsense talked about and promoted by all of them.

When SS leader Heinrich Himmler came upon Wewelsburg castle to use as the headquarters of the SS he ordered a massive renovation and update process to begin. As most people know he was a fan of all things mystical, metaphysical, and legendary, going as far as hiring the charlatan Karl Maria Willigut as an adviser just because the old man could spin a good yarn about such things.

One of the fantasies Himmler was most fond of was the King Arthur myth. In an attempt to emulate part of that he built a round table where he and his highest ranking SS men could meet and talk. As in the myth of the 12 knights at the round table Himmler’s table had room for 12 men. These 12 men would be the leaders of the 12 branches of the SS. To sit underneath it he took ancient Germanic sonnenrad symbols as an example and had an updated, more aesthetic version with 12 spokes designed. 12 spokes was not the only change made, most actual historical versions have an open center, or a crossed center, or the spokes all meet cleanly. Himmler’s also had a circle in the center placed there to hold a golden disk which represented an “eternal flame” which would represent his eternal knighthood of the SS. Its all nice and well inspired stuff to be fair. The man clearly had a flair for this kind of thing and that’s the reason why third reich occultism has been speculated on so heavily and beaten to death by writers, hacks, wannabes, and fake historians ever since… even including the Star Wars franchise as you will see later.

While the castle sunwheel is clearly inspired by ancient designs it is not one and shouldn’t be considered as such. There is nothing ancient about a custom design from the 1930s.

There is one more important detail which is often ignored due to its inconvenience… The Wewelsburg sonnenrad is green, not black. It never was referred to as a “black sun” by Himmler, the SS or anyone else during the third reich……………..

What does this mean? Simply that absolutely nobody other than the SS men, and occupying allied officers ever saw the inside of the castle. Nobody but them knew the sonnenrad was green. The area with the sunwheel in the floor was kept closed off even as the rest of the castle was opened to the public. Nobody but them knew it existed at all, UNTIL…. Well until 1982 when there was a historical exhibit called “Wewelsburg 1933–1945: Cult and Terror Centre of the SS”

Does this give credibility to the post war cultists and neonazis who claim knowledge of the black sun and its deeper esoteric meaning? Some may argue that if they were talking about it in the early 50s before the castle was open to the public they must have known something, but why they did they get the color and name of it wrong? If they had such inside knowledge from before the end of the war why did they not know it was green? Why didn’t they know it was never called the “black sun”?

The answer for that is the US Third Infantry Division. When they came across the ruins of the castle after Himmler ordered it destroyed their photographer made quick work of saving everything he could on film. BLACK AND WHITE FILM. Film which resulted in photos where the green sunwheel looked black….. His photographs were used in some news papers and magazines.

Again I would ask: How credible is someone who uses the wrong name on a symbol? A name which wrongly describes the appearance of the symbol? A symbol which they falsely invent and attach esoteric meaning to based on its alleged color then pass it off as inside knowledge of SS occultism and the true spirit of the NSDAP?

This symbol, used as a prop instead of a swastika in their “esoteric Hitlerism“ cult which began as a lie by FDR and his propaganda men before the war. Goebbels mocked and challenged FDR to produce the evidence FDR claimed to have so intensely that the American media also demanded it to be released, at which point FDR stopped talking about it.

This time he made concrete accusations against the policies of the Reich, which he attempted to prove though compromising documents he allegedly possessed.

Mr. Roosevelt claimed that he had proof in his hands that the Axis powers were planning to reorganize South and Central America. They were planning to transform the existing fourteen countries into five states that would be under their control. His proof was a secret map allegedly produced by the Reich government. The American government also claims to possess another Reich document. According to it, the Reich government plans to abolish the existing religions of the world once it has won the war — Catholicism, Protestantism, Mohammedanism, Hinduism, Buddhism, and Judaism. They are to be replaced by an international National Socialist church, the cross by the swastika, and God by the Führer. That is what he claims.

It is clear to us that Mr. Roosevelt needed this grand swindle to whip up American public opinion. He needed the heaviest possible ammunition, since the American people are at the moment more intelligent than their government and want absolutely nothing to do with the war in Europe. We really are not all that interested in Mr. Roosevelt’s opinion of the intelligence of his people nor in what he thinks them capable of believing, and normally would see no need to reply to his bald-faced and outrageous lies which so clearly bear the signs of fabrication. In this case, however, it is a matter of a political falsification which seems to us to have a clear and ominous purpose, and gave us such an easy chance to show up the liars to the entire world that we could hardly let the opportunity pass. We had to overcome our moral scruples, however, to confront the liar and ask him where he got these alleged documents from, where they can be found, and if he was ready to show them to the public.

Things went as we expected. Mr. Roosevelt, the president of a nation of 130 million, dodged our questions. He claimed the authenticity of the documents was unassailable; he had them. They could not be published, however, since they were secret and publishing them would reveal the source. And the map in question that carved up Central and South America had markings in pencil which could compromise the source that provided them. He, Roosevelt, did not want to cause any difficulties for the poor chap who passed them along.

As one can imagine, Roosevelt’s answer was not very convincing proof of his hair-raising allegations either at home or abroad. Our tough questions bore fruit. We used the press and radio to propose to the American president that he might publish the incriminating map of Central and South America, perhaps either erasing the ominous pencil markings or covering them up with paper, and to at least publish the text of our notorious plan to begin a campaign against all the world’s religions once the war was over, from Jehovah to Confucius to Christ.

We looked further, and since we could learn nothing more given the stubborn silence of the accuser, we attempted to lure him into a response by massive attacks. Alas, the normally talkative gentleman seemed to have forgotten how to speak. Even the attempts of the American press to learn something more as he visited one of the famous skyscrapers were in vain.

The Reich government published two formal denials on 1 November, which boxed Roosevelt’s ears so strongly that he had to chose between revealing his documents or proving himself a forger and liar to the entire world. He chose the latter. The U.S. press gave headline treatment to the German denials and asked for a response. Mr. Roosevelt accepted the blows, rubbed his checks and said nothing. We made every conceivable suggestion to ease the publication of the documents, but the U.S. president preferred to be thought a liar and forger than to prove his absurd accusations.

These people clearly knew nothing, they were a combination of frauds, hucksters, and enemy agents bent on misrepresenting the memories of the SS and NSDAP for their own reasons, but what would you expect from the kind of larping frauds who associated with the paid actor and enemy agent George Lincoln Rockwell?

The REAL “Black Sun” as used in German esoteric circles before WW2:

This is a symbol few people know of, mainly because it was an actual esoteric symbol used by occult circles, and secondly because it was hardly ever used. While talk of it did get around it was not very widespread. There are a few books which mention it and contain images of it, and I have seen no old books on the subject of so called “nazi occultism” which contain images of the Wewelsburg castle sunwheel referred to in this context.

Now before you armchair experts and angry neos and “black sun” cultist morons get your panties in a wad and start foaming at the mouth I would like to point out that even George Lucas who wrote Star Wars knew more about the myth symbolism and occultism allegedly used by factions of the NSDAP than you do.

In Star Wars, a film series where the empire are “Space Nazis” and the rebels are “Space Partisans” there’s an elite faction which use “Vril Magic” (the force), and the symbol used for the “First Order” is the actual real black sun (not the green castle decoration).

There are allegedly connections to older Middle Eastern Saturnian cults which also use a “Black sun” symbol of some type, but I mainly study Germanic history or broader Western history, and am not very concerned with minor details regarding outsiders.

View all posts by Johnny Otts